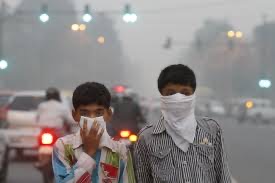 The idea that global warming and pollution levels are increasing dramatically has been talked about for years. Many people brush this idea off their shoulder, not listening to the true implications that are currently occurring in the world around us. It is time though to start listening.

It is clear that humans are the main cause of these increases in global temperatures. Of course, there are natural factors that add to global warming and pollution such as the greenhouse effect, ozone, carbon dioxide, and solar radiation. These are all natural causes of air pollution. Although, these are not the only causes of pollution as humans play a large factor in increasing our emissions and creating more air pollution and not many realize and even if they do, nothing is being done to fix it.

Action needs to be taken immediately instead of being pushed in the corner like a minor inconvenience. Environmental studies, teacher Mr. Erik Best said, “I think it is ridiculous that the heads of our government are denying that global warming is an issue.” We are moving in the wrong direction, especially with President Donald Trump withdrawing us from the Paris Climate Agreement—an agreement with the United Nations that focuses on fixing global warming, combating greenhouse gas emissions, and more. We signed out of this agreement at one of the worst times for our planet. This is a world-wide issue, and the nations collectively need to come together to fix this continuous issue of damage that our planet is enduring instead of ignoring it.

Rather than focusing on problems so much attention around impeaching the president, we need to shift that focus on the ability for Earth to sustain organisms not just the human race but animals as well, which are equally if not more important than humans. Currently, not enough is being done to fix that, especially when we are constantly dividing the nation politically.

Famously recognized from the popular series Bill Nye The Science Guy, scientist Bill Nye came out with a public service announcement in the form of a video and said, “By the end of this century, if emissions keep rising, the average temperature on Earth could go up another four to eight degrees. What I’m saying is the planet’s on… fire.” He continued this and said, “No, of course not — nothing’s free, you idiots… You’re not children anymore. I didn’t mind explaining photosynthesis to you when you were 12, but you’re adults now and this is an actual crisis. Got it?”

It may seem funny at first, but Nye was addressing this extremely issue that affects everyone if not fixed soon, will have serious consequences. There are solutions to be made, and yet the government and corporations are just not willing to spend the money where it should be spent.

One of our largest and most negative contributions is air pollution. We can see this when we look at the AQI (air quality index). According to AirNow, “Think of the AQI as a yardstick that runs from 0 to 500. The higher the AQI value, the greater the level of air pollution and the greater the health concern. For example, an AQI value of 50 represents good air quality with little potential to affect public health, while an AQI value over 300 represents hazardous air quality.” With this knowledge we can look at just a few countries and see their AQI value is astronomical. India is one of the worst, having numbers as high at 176. Indian people have to wear masks over their mouths and noses just to go across the street.

Another country with poor air quality is China. Their place on the AQI meter has areas as high as 271. Here, they also cannot leave without masks on their faces to avoid detrimental hazards. Some places, specifically in a lot of these third world countries on Earth are literally at a point where it is no longer safe to breathe and ingest the air around you.

There is also a major problem with water pollution. We are currently experiencing this really close to home in Flint, MI. There are large amounts of lead in Flint’s water and this has been going on for years with the problem being highlighted 2014, yet almost six years later, nothing has been fixed, even though the government has known about it from the start. Other countries deal with these instances, but not just in one city, but within the whole country like Pakistan and in many cities in Africa.

We need to face the reality that this planet can only handle so much, and the way that we treat our planet is not helping. There are so many solutions that we can implement such as producing more electrical cars and making them less expensive to the public, having more recycling options available, and encouraging those to get more involved with recycling.

If you want to get involved and help make a change, there are so many ways to do this. Recycle more often, do volunteer work that involves picking trash off the road or helping deliver clean water to in need. Walk to class if you are able, reduce fireplace or firewood use, and make sure your tires are properly inflated. There are so many more things that you can do to get involved, and we need to start doing them before it is too late.

What you can do to help: